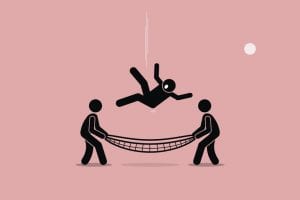 The government has introduced a number of schemes during the Covid-19 pandemic to minimise risks that might otherwise have resulted in the economy grinding to a halt. Ongoing reports on the economic outlook of the country may look pretty bleak right now, but imagine what they might have been like without government intervention.

It is argued by some critics that a number of the schemes are, in hindsight, less than perfect and that they sidestep a number of smaller organisations and, more recently, self-employed people who still need support.

However, some of the initiatives have helped, in the main, to keep certain aspects of the economy moving, namely:

This article looks at the Credit Guarantee Scheme, what the government is doing and why, and how this is going to help many suppliers who would otherwise have struggled.

What Credit is Being Guaranteed?

Trade credit insurance is a policy that suppliers take out to protect themselves against the possibility of a client not paying for goods or services supplied – whether through defaulting on payment or simply being unable to pay. This is a vital part of market confidence; the shield that protects suppliers against the uncertainty of market forces and, more specifically right now, the ravages of Covid-19 on the business world. Supply chains rely on this sort of confidence to keep going, as in the face of coronavirus many had begun to question the risks they were facing.

The History Behind the Credit Guarantee Scheme

Some would (and do) argue that the insurance sector is particularly good at protecting its own interests and less effective at honouring the claims made against it. Examples of this have been seen recently in travel claims made relating to Covid-19.

Insurance cover, no matter what you are insuring, invariably comes with a long list of exemptions. And when coronavirus hit UK businesses, many insurers chose to batten down the hatches, removing trade credit insurance for suppliers from their portfolio or increasing premiums to uncomfortable levels to protect themselves from potential claims fallout.

As always, actions cause reactions and on seeing a few insurers taking this path, many more considered how they might handle underwriting going forward. Suppliers also started to consider how they might be able to mitigate their credit risk should they no longer be able to find affordable cover against non-payment from clients.

Though it may seem obvious that this is a coronavirus issue, it seems that the conditions for such a change in the insurance sector may have already been in existence before the virus hit us. We have had a tumultuous few years, with polarised politics, controversial elections, and Brexit dominating the headlines. In 2019, the insurance sector apparently saw claims at their highest levels in a decade.

Government Injecting Confidence Back into the Market

When the Treasury agreed to provide a short-term guarantee to trade credit insurers – for all business-to-business transactions – to shield them from losses, they became a ‘reinsurer of last resort’, providing credit insurers with the confidence to continue offering insurance to suppliers.

Had they not have done this, then at any point the supply chain could have jumped its metaphorical sprockets and both suppliers and buyers would have suffered as a result.

To give an idea of the scale of this matter, The Times reported that in 2018, trade worth £350 billion was covered by insurance. In April 2020 alone, £171 billion was insured. These are truly immense numbers. What April’s trade figure means is that 13,000 suppliers were protected and 650,000 buyers served, many of whom may not have been if that insurance had been withdrawn.

The Treasury’s scheme will cover domestic trading and exports, providing additional confidence to suppliers throughout the supply chain. A necessary extension in the interconnected world in which we live.

The guarantees and the confidence it provides will ensure that many suppliers who otherwise might have reduced staff numbers and contracted their trading, may now be able to maintain business as usual in an uncertain world economy.

CBI Chief Economist Rain Newton-Smith is reported as saying: “This intervention will keep cash flowing within critical supply chains and more importantly, it will help lower risk for our exporters and ensure that UK firms can continue to trade with other countries. Getting this scheme up and running is crucial as the UK economy gradually restarts.”

Sources suggest that the risk may be shared between government and insurers, and it is virtually inevitable that suppliers will face higher insurance costs and more restrictive policy clauses until things settle down again in the market. Though when this may be, nobody can possibly know.

It’s reported that the government plans to run the credit guarantee scheme up to the end of the year, at which point, quite sensibly, it will be reviewed. We are unlikely to be out of the woods at that point, but the relative risks and rewards will need to be assessed and the support offered may need to be adjusted accordingly.

For now at least, a large amount of business has been underwritten by the government to ensure that the wheels of commerce don’t come off anytime soon.

Our experience of over 500 complex supplier relationships, means we can share a lot of really good practices with you. These drive innovative behaviours to provide on-going cost reduction and service effectiveness between you and your strategic suppliers. To learn how to build trust and resilience quickly with your suppliers and how to address the 3 big dangers in dealing with strategic suppliers right now and action steps to follow, why not watch our webinar Managing Strategic Suppliers in a Crisis?