Home » Blog » Should I terminate my supplier contract early?

Should I terminate my supplier contract early? 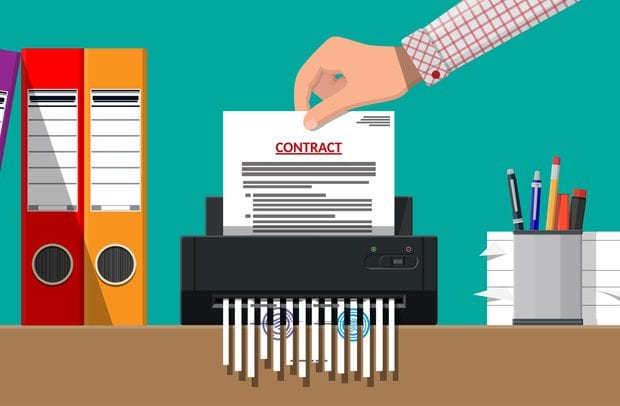 Deciding to terminate a strategic supplier contract before the end of its contract term, is a major undertaking. It poses a real risk of disrupting your organisation’s operations. It is also a significant drain on your time and potentially very expensive. Before terminating, you must be certain that you’ve done everything you reasonably can to get the relationship back on track. If matters end up in court, even if you win your case, a Judge may penalise you on costs if you have not genuinely attempted to resolve the issues and get the relationship working.

Think about why the relationship has failed

An important stage in deciding whether or not to terminate a supplier contract is to understand why your relationship has gone wrong. In our experience, the majority of disputes arise when the purchaser has relied on the supplier’s expert advice that it can provide a solution that will achieve the purchaser’s business outcomes and this has not materialised. These difficulties can often be traced to the supplier not undertaking appropriate due diligence during the early stages of the relationship, ideally pre-contract.

In the current financial climate, suppliers are under enormous pressure to achieve results for their shareholders. Some can, therefore, be overly enthusiastic in their claims about what their solution will do for you and the benefits you are likely to achieve. In its desire to win your business, the supplier may not undertake enough due diligence to identify what its solution will deliver to you, what it won’t deliver, and the consequential effects on your operations of any compromises you will have to live with. This usually results in you having unexpected changes to the implementation, suitability of the solution, timeframes and costs.

On occasions, we have seen suppliers under such internal commercial pressure that once it has won the right to provide an outsourced service to you, it will knowingly put in a solution or take on a supply chain agreement that it knows (or suspects) may not meet your expectations. While this creates the risk that you might terminate for poor performance, it is very unusual for the client to do so because of the client’s reliance on the services once implemented by the supplier.

It can take time to find out the delivery is poor

The implications of a supplier’s decision/action/performance can take many months to reveal itself in poor service delivery, by which time the delivery process is often in full swing. When this happens, the supplier can be playing a game of chance; claiming that you didn’t quantify your requirements properly or have changed your mind, to divert attention from its failure to achieve your business outcomes.

Has your own team contributed to the failure?

When misunderstandings arise during a strategic relationship, it is human nature to apportion blame elsewhere, whether it be the supplier’s team or yours. You need to be very careful of your facts before you accuse your supplier of not achieving what you expected and terminating the agreement.

If your supplier has represented itself as a specialist in its field and therefore has implied obligations to operate its duty of care and duty to warn you, then it’s also fair to say that you have a reciprocal duty to your supplier to cooperate with them to the best of your ability.

Project management methodologies (such as PRINCE2) are often used to measure the performance of transition and transformation projects within a strategic relationship, but they usually don’t take appropriate account of contractual obligations. This means that the roles and responsibilities being undertaken by your and the supplier’s teams can actually remove your supplier’s contractual obligations without you realising it.

Does your supplier have a valid defence?

Your supplier will usually counter your claims by arguing that problems with the relationship and poor service delivery are due to your failure to provide enough information at the outset. This is usually followed by the supplier accusing you of:

Before deciding to terminate a contract, you need to check your evidence to see whether the supplier’s arguments are valid. This usually (but not always) comes down to having sufficiently well-documented evidence as to what has gone wrong. In our ‘Frequently Asked Questions’, search for ‘What evidence do I need to check if I am terminating a contract early’ for more on this.

Have you exhausted all other options before deciding to terminate your supplier contract?

Before deciding to terminate a contract be sure that you have exhausted all the performance improvement, service improvement planning and escalation routes available. If the supplier continues to fail to meet the required performance levels, then you would begin the mediation and disputes resolution process.

Can you renegotiate rather than terminate your supplier contract?

In some cases, renegotiating instead of terminating a supplier contract can save time and money. Common items to renegotiate are – performance, benchmarks, service levels and price.

Many strategic contracts allow pricing and service levels to be adjusted based on benchmark results. Benchmarks allow an independent third party to compare the contracted performance, services and prices in relation to relevant market standards. If the performance, prices or services have fluctuated from the contract terms, either party may seek to revise the agreement.

Service is a big factor that can be renegotiated. Depending on how the market has changed, you may find that you need to increase or decrease your service levels. You may also find that the supplier is performing well for one set of services but falling short elsewhere. In this case, you might terminate services that are not meeting expectations but retain those that are performing well.

Over the course of the contract term, prices can also vary. This is especially true in technology markets where the asset costs of an ICT managed service decrease with age. In such situations, a contract provision can be written so that both parties benefit from upgrading technology systems if technologies increase in capacity but decrease in cost.

The process to terminate a supplier contract

The basic rule in English Law (and most other European/Common Law jurisdictions) is that a breach of ‘condition’ allows the other party to terminate the contract. A ‘condition’ is a serious breach, not necessarily restricted to a breach of a written contract term, that has a material impact on your organisation’s operations.

If the serious breach can be proven (and there are various tried and tested mechanisms to prove breaches in strategic, commissioned and managed project services), then the ‘innocent’ party is ‘let off’ from continuing with the contract. This has two key effects if the contract is formally terminated:

While there are mechanisms to reduce the impact of a poorly implemented termination process, this adds to the time and cost of termination. It’s better to avoid the argument by following the written contract terms.

In all cases, you must formally communicate the contract termination to the supplier in accordance with the written contract terms. Failure to do so will simply raise arguments over whether the contract was correctly formally terminated or not.

Once terminated, you must be careful of your behaviours and not do anything that is inconsistent with the contract termination. As detailed in our white paper Strategic Supplier Responsibilities, your behaviours in rescuing a poorly performing supplier relationship usually take precedence over any written contract terms. The same applies for termination.

If you do formally terminate, but your behaviours after termination suggest the contract is continuing, it allows the supplier to argue that you are ignoring the termination. There is supporting case law where Courts have found a ‘terminated’ contract has, in real terms, not been terminated, because the behaviours of the client and supplier implied the contract and relationship was continuing. This meant that the client and supplier retained their obligations to each other as the Court found the contract was still in force.

You may have tried everything you can but still feel the relationship is broken. Disputes with suppliers can be highly stressful and emotionally draining for all concerned. When emotions are running high, it is worthwhile obtaining an independent sanity check of your situation, to assess whether the evidence suggests you should try to salvage your relationship or whether it would be better to terminate. If you still wish to press ahead with an exit, you need to ensure that your evidence of the supplier’s non- performance and your exit strategy stacks up, so you can exit safely, quickly and at minimum cost. See FAQ Early contract termination evidence: what do I need? for more guidance.

If you have reached the stage of deciding whether or not to terminate a supplier contract early and would see value in a confidential (no obligation) chat about your options, please call 0845 345 0130 or you can book a call directly with Allan Watton (BPG’s CEO) using the calendar feature here.