Home » Blog » What happens if a contract becomes impossible to perform?

What happens if a contract becomes impossible to perform? 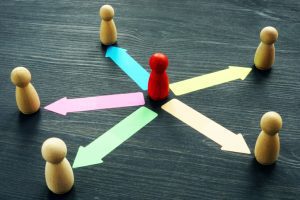 When clients and suppliers form business contracts, neither side ever starts off ‘expecting’ failure. However, that does not mean planning for this eventuality should be overlooked. Both parties need to have suitable contractual provisions in place to avoid the possibility of issues further down the road should the unexpected happen.

When a supplier becomes unable to perform its duties as outlined in the contract it may be due to any number of reasons, including going out of business, experiencing financial difficulties, simply not being able to deliver to the service requirements or on some occasions, due to other forces beyond their control.

If this happens, it is important for you to take swift action to protect your interests.

The initial steps you should take are as follows:

If you’re in this situation, you may be wondering if you should let your supplier out of the contract. However, first you need to weigh up the pros and cons before making such an important decision.

On the one hand, letting your supplier out of the contract could be beneficial (as long as sufficient and reasonable exit and transition arrangements can be agreed) as it would allow you to focus on finding a new supplier who actually can deliver the service rather than getting bogged down in legal wranglings with a supplier who can’t. The advantage of this would be to look to avoid delays or unnecessary issues for your business. However, this can be risky because what would happen if you are not able to find a new supplier in time, or if they are more expensive?

Factors to consider before releasing a supplier from its contractual obligations

How important is this supplier relationship to you? Do they deliver other contracts for you that you wish to continue? Up until now, have they been a valuable supplier/collaborative partner? Have they clearly demonstrated that they made every effort to deliver the contract, but are facing factors (legitimately) beyond their control?

Being pragmatic and letting the supplier out of the contract could be the most effective and efficient course of action for your business. Subject to the reason why the project can no longer be successfully delivered, it may put you in a strong negotiating position when seeking costs, damages, and agreeing exit arrangements. If you do decide to let your supplier out of the contract, make sure to get everything in writing – including the terms, costs, roles and responsibilities for exit and transition – so there is no confusion later on.

In some cases, it may be necessary to go through with legal proceedings in order to receive appropriate compensation for damages. However, we would usually urge that this should only be done (a) if you have clear and objective evidence that your supplier is largely accountable for the lack of fit for purpose delivery of the project, and (b) as a last resort, as any legal process is often largely inefficient and can be costly and time-consuming.

What contractual terms cover the agreement becoming impossible to perform

Parties will look to end their contractual relationships for a vast number of reasons, some of them perfectly legitimate and others less so. In the case of a contract becoming impossible to perform, the two primary contractual terms to consider are force majeure and frustration.

Most contracts today consider the possibility of events that are outside of anyone’s control: something like a natural disaster like the recent storms in the US, a pandemic such as Covid-19, or a political change that significantly impacts the legal and judiciary landscape, for example, Brexit.

In certain circumstances, some of these events can end up, in contractual terms, as ‘force majeure’. These terms can legitimately excuse one or more of the parties from performing its duties under the contract because an event has occurred that physically prevents the contractor/supplier (or in fact, yourselves) from being able to do so.

A force majeure event does not automatically trigger the force majeure clause. Because of the nature of events this clause is designed to cover it is rarely an open and shut case as to whether one or both parties could be excused from performing their obligations. Often a catch-all such as ‘Act of God’ is used where interpretation by parties and/or a court of law, may be required. Hence the need for discussion, collaboration and agreement based on mutual benefit to avoid protracted legal disputes ensuing.

Notification that a party wishes to rely on force majeure to excuse itself from its contractual obligations would normally need to be made within a specified time period of the event itself. And that party must be able to evidence that it has done all it could to avoid or prevent the triggering event occurring in the first place. In other words, to sit back and allow it to happen as a convenience would likely prevent force majeure being used as a legitimate get out of contract free card.

The doctrine of frustration

For an event to be frustrating, in English contract law, it must be so fundamental that it makes a party’s performance of their role in the contract either impossible or illegal, or it changes the playing field so much as to make it materially different from what was considered when the contract was drafted. Secondly, the frustrating event must not be the fault of the party seeking to rely on frustration: they cannot light the fuse which caused the event to occur.

The doctrine of frustration is an exception to the rule that states that a party will be liable for damages if it fails to execute its duties under the contract. Frustration discharges the parties, setting aside the contract.

However, the criteria for frustration is challenging to evidence, which is why it is an option of last resort behind force majeure.

The relationships you build with your suppliers are worth fighting for. The procurement process is long and costly, developing working relationships, commercial trust, an understanding, a way of working, an appreciation for what triggers the right behaviours and so on. These are hard-won and losing them will likely mean a significant amount of time, money and frustration to get back to where you are now with a new supplier. However, where your supplier is genuinely unable to get you to your planned destination it’s important to know when, and how, to cut your losses and move forward.

The longer you have been working with your supplier, the more projects you’re currently working, or planning to work, with them on and their performance to this point are all factors in an intricate and ever expanding web of relational domino effects that make it a complicated affair to determine the true benefit or danger of letting your supplier out of its contract.

If you need help with this calculation, with the process of untangling cause and effect in your relationship to determine the best route forward, to assess whether force majeure or frustration are legitimately in play or to determine a step-by-step process for exiting your existing supplier relationship and entering another with as little delay and fuss as possible, click here to contact our team today.

Free Guide: How To Exit A Failed Strategic Supplier Relationship

A detailed 10 step process to exit your contract and project quickly and safely. 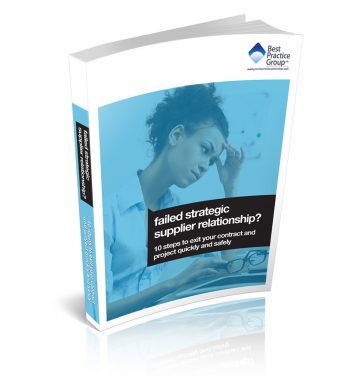