Home » Blog » Capita: Could parts be sold off to Venture Capitalists? 3 considerations for your services

Capita: Could parts be sold off to Venture Capitalists? 3 considerations for your services

The London Stock Market is in challenged circumstances due to the coronavirus (COVID-19) being declared a pandemic. Even before this, Capita’s share value had declined significantly, only to fall even further (in amongst the rest of the world’s stock markets) once the coronavirus was reported to have taken hold.

According to a SKY News article at the beginning of March, Capita’s shares are reported to have slumped by around 40% as the outsourcing giant continues its long road to recovery under the stewardship of chief executive, Jonathan Lewis. His strategy, so it’s stated, is to achieving this goal through a simplification of the company’s portfolio.

As a result, a number of acquirer organisations are reported to be interested in several of Capita’s outlying subsidiaries. So, could parts of Capita be broken away to be sold off in the near future, and if so, what would that mean to those currently being supported or serviced by them?

Nine of Capita’s subsidiary businesses are apparently being considered for sale. These are reported as being non-core entities and include a facilities management business servicing police constabularies across the country, a debt collection agency and an events business.

Capita itself has stated that it has been on a road to recovery for a time now. An article in The Guardian suggested that there were two fundamental reasons for this,

2) it’s accelerated growth, something recognised by Jonathan Lewis himself, who, shortly after his appointment in 2018 was reported as saying that ‘the company, which has grown rapidly through a string of acquisitions, had become “too complex” and admitted the firm was lacking in discipline.’

Capita is looking to reassess its group. A spokesperson for the company reportedly stated “We decided in early 2020 to reorganise our Specialist Services division and, while some businesses within this division will remain with Capita and have been moved into other divisions, some of the other businesses are now being prepared for disposal.” Though it’s believed that Capita is only interested in selling all nine entities together, rather than splitting them out as individual businesses.

There are believed to be a number of organisations interested in coming to an arrangement with Capita. Leading the field is London-based independent private equity firm, Epiris. It’s been around for almost half a century, investing between £40 million and £150 million in ‘opportunities to transform and reposition businesses’. Epiris is already a full or part-owner of tens of companies, some of which are UK household names, including Cala property developers, Bonhams Auction House, Hollywood Bowl and TGI Fridays. With irons in similar fires to the businesses that Capita looks like it’s interested in selling, the attention from Epiris seems perfectly logical.

What Could a Sale Mean to Those Who Rely on These Businesses?

Change can be a traumatic experience and the worry of change can unnerve clients and suppliers alike. So, when your supplier looks like it may change hands there are a number of things to look out for to ensure that your interests are protected throughout this period.

Innovation is the ‘magic’ that you hope will be included in any strategic service/project relationship, the manifestation of your supplier’s passion for their role and their commitment to you as their client. It’s more important now in these crisis times, when everyone is struggling to keep the wheels on basic service delivery.

There are a number of mechanisms you can employ in order to maximise the chances of your supplier prioritising innovation. One thing is likely however, when your supplier is preparing itself for sale (or if it has got itself into financial difficulties), you will need to re-affirm, from the evidence of its on-the-ground behaviours, its commitment to innovation. If matters get tight, either because of trying to shore up the profit and loss/balance sheet, you may find that without re-affirming that evidence, resources may be diverted and innovation may simply no longer be a priority of theirs. Monitor your supplier’s innovation levels, come to recognise its ebbs and flows and if you notice it fall off a cliff, ask the right questions because this may be the first sign of adverse change on the horizon.

When a supplier takes on a new strategic relationship, it is inevitable that they will wish to make a great first impression, putting their best people on the job. Once processes are finely tuned and everything is running like clockwork, you may see some of these skilled individuals peel away to work on relationships for other clients, but a core of innovative managers and talented workers will remain.

However, those with the skills to climb the corporate ladder will also have their ear to the ground, so if there’s a hint of take-over change, they may well start looking to protect their careers by looking elsewhere for their next employer. If a sale is on the cards, then those talented individuals may be spread thinly across multiple projects to make the supplier’s portfolio look as good as it can be. So, whether they’re reallocated, shared or disappear one day, what’s happening with your supplier’s talented individuals could well be a good early indication that the best talent may well not stay around.

With regular client-supplier meetings, a strong Intelligent Client Function (ICF) team talking to their supplier-side counterparts and clear, managed and monitored KPIs, it will be immediately obvious if and when productivity takes a dip as a result of team members self-isolating, or for non-isolation related issues, such as great team members simply moving to other organisations.

Having a highly capable ICF team, will assure they have the on-the-ground insights from the supplier, to know whether self-isolation is paying a genuine part (which at the current time, it probably will). Alternatively, whether, to them, a sale of their organisation may mean job losses, insecurity, financial problems or change.

Once it is known or suspected by a supplier’s workforce that their employer is to sell, you are likely to see issues with morale, productivity and commitment.

All three of the above are indicators that a sale might be in the offing. This, if recognised soon enough, could be used by you to initiate processes that could minimise the impact on your organisation. Monitor the changes you’re seeing and the negative impacts they are having on your organisation as you will need this evidence later on – even if only to discuss with the supplier at a later time.

Utilise the proactive and collaboration mechanisms in your contract to ensure that all concerns arising from your supplier’s delivery team about the passing of a potential sale, are highlighted and discussed with your supplier. This will more likely shine a light on a problem that can sometimes be the beginning of a collaborative route to a solution.

While clients of the businesses Capita may be considering selling could well be feeling nervous at this prospect, there is a positive side to this. Whichever organisation does eventually purchase them, they are likely to have deeper pockets and new ideas – so both the will and the means to innovate and drive improvements and efficiencies that could well result in better service.

We will have to watch the Capita space to see what happens over the coming months and we’ll let you know what we hear. 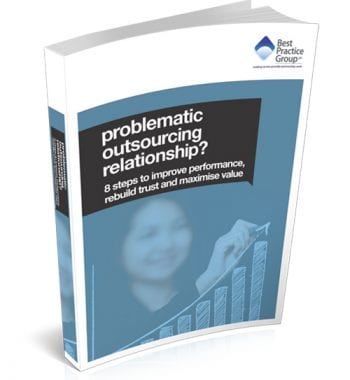